What can you do with obnoxious racists? Reason doesn’t work, and even baseball bats can’t knock sense into a bonehead. But we can expose and mock them. 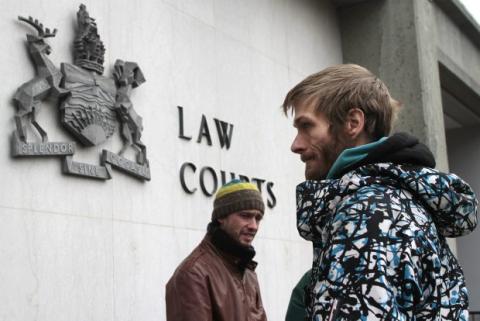 In October 2012, members of the conspiracy cult and Occupy splinter group We Are Crazy Victoria announced that lawyer and white supremacist Doug Christie would be speaking at a rally at the BC Legislature in Victoria BC.

No way. That’s not okay. I’d never met any of these nutbars, but we all knew their reputation for harassing women and people of colour. Clearly, we needed to call a counterprotest.

Friends and allies helpfully contacted all the other speakers to inform them they were sharing a stage with Canada’s best-known racist. They had no idea Christie was coming. Five speakers – including the keynote – immediately canceled. In a panic, the organizers dropped Christie from the event – and then blamed me for “censoring” him. Ryan Elson and Josh Steffler scrambled to cast themselves as advocates for “free speech” while vilifying me for infringing Christie’s “rights.” Among other threats, Elson said they would sue me for criticizing WeAreCrazyVictoria, and have me arrested if I showed up for the counterprotest.

That didn’t happen, but it was a hilarious day nonetheless.

Half an hour before the haters’ rally was set to begin, we set up a couple signs at the Cenotaph on the corner of the Legislature lawn, 200 meters from the wingnuts’ stage, and handed out leaflets explaining we were counterprotesting against racism, bullying, and hate speech.

Just before noon, the “free speech advocates” came over to shut us down. Ha! Fat chance.

They came straight for me, ignoring the rest of the group. Elson got right up in my face screaming abuse. That’s when I got out the megaphone. Elson was trying to get nose-to-nose with me, but with the bullhorn deployed, he got a face full of “Back off racist scum” with the volume cranked to 11. 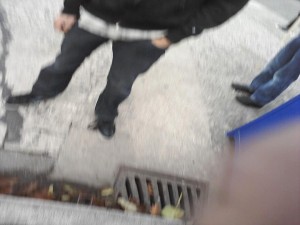 Naturally, this tough guy was more interested in picking on me (I’m 5 feet and 110 pounds) than the linebacker-sized ex-bouncers standing around me with the signs. Any one of them could pick Elson up with one hand and break him like a twig, and they were ready in case he laid a hand on any of us.

The “back off racist scum” commotion drew two police officers from their post at the Legislature Building. As they approached, Elson pointed and hollered: “Officer, arrest her! She doesn’t have a permit to be here!” The cops said, “Step over here son, we’re gonna explain something to you.” Here’s the little bully, getting TOLD. 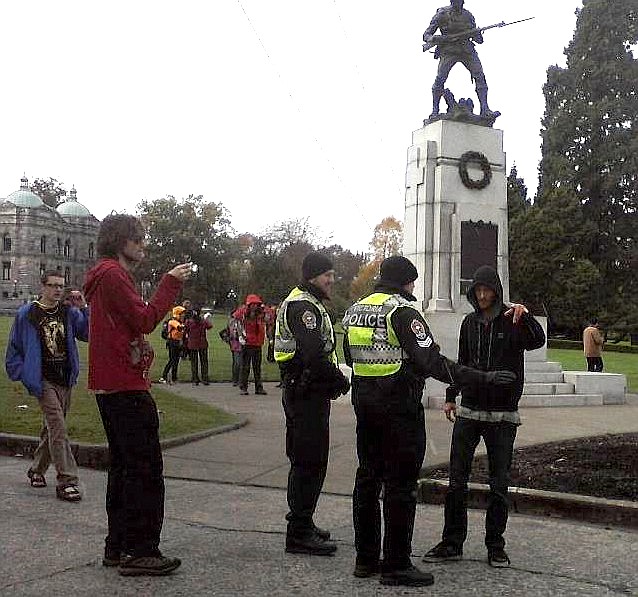 The nutjobs had no choice but to slink back to their “rally,” which consisted of fewer than a dozen people on the Legislature steps. We serenaded them with rousing chants of “Hey hey, ho ho, racists have got to go!” and handed out hundreds of flyers. The wackjobs got schooled. It was a fine day.

But it’s not over yet – the haters are setting themselves on fire in a desperate grab for attention. In a long, incoherent blog post, Elson proclaims he’s a “victim” of homophobia and accuses me of somehow outing him as gay, which is news to everyone but his boyfriends, apparently. So now Elson is Canada’s version of the gay conservative who beat himself up. Except that Elson claims he was in the closet before he announced that he’s gay and that makes it all my fault, or something. 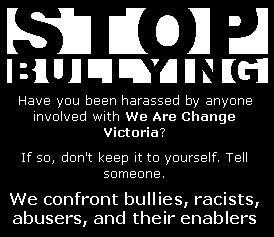 It seems I have hurt the racists’ feelings. So they are calling me a terrorist and howling for my arrest on charges of “criminal defamation.” Funny! I thought they were opposed to censorship. Anyway — bring it, boys. The publicity would be worth the price of admission.

I mentioned that these wingnuts are setting themselves on fire. Here’s an example: According to Elson, this video is irrefutable proof that PAOV (People’s Assembly of Victoria) and I secretly control Facebook. The video was recorded at an October 2012 meeting of WeAreCrazy, and we get to eavesdrop as Josh Steffler and other members discuss things like dealing with the “Zionist-controlled world government” and being called “Holocaust deniers.” Which they certainly are NOT, because you can’t deny something that never happened, amirite?

While you’re at it, check out this video (also from October 2012) of Elson trying to file a complaint with the Human Rights Commission about an imaginary future “genocide against white people.”

And take a look at this image Elson posted on the Occupy Victoria B.C. page on Facebook around the same time. It’s a swastika with a photo of Hitler and the text “Last time it was the JEWS, this time it’s white men.”

Of course, just a couple weeks ago, WeAreCrazyVictoria was proud to feature a video of Doug Christie speaking at their 2011 rally — until they realized their racism was showing, and purged him. What a shame! Especially since they were so pleased with themselves for inviting him to speak as a surprise guest at their rally last year. Where is your “white pride” now?

But wait, there’s more. Josh Steffler has made his own video to show us he and WAC are not really racist at all. That’s because there are no “races,” there is ONLY ONE RACE. So that makes us the real racists, because we keep talking about race and racism. DUH. (Bonus: BOLSHEVIKS!)

It’s easy to mock their ignorance, but these idiots are trying to recruit new members and launch new assaults on our friends, fellow activists and “the left” in general.

So IT’S ON, assholes.

Related:
So I filed a lawsuit against this local wingnut

How to Oppress Men

Tagged as fixx_revolution, Ryan Elson, stealthc, We Are Change Victoria