The Return of the Wingnut 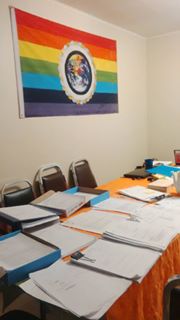 The Wingnut Lawsuit at the House of Solidarity

Heads up! After a year and a half of sulking, the wingnut is back and stupider than before. I’m in court this month because this Libertarian dude is still trying to sue me for things I wrote on this blog three years ago. He’s not doing a very good job of it.

It started in 2012 when the wingnut and his buddies invited a well-known white supremacist to speak at a rally at the BC Legislature. We showed up to counterprotest. A few of the nuts confronted us and their feelings got hurt.

Now this dude is trying to sue me for libel in Supreme Court. For this round, he’s filed over one thousand pages of documents, plus a half dozen DVDs and minidiscs. Everything I’ve published in the last ten years, my blog, Twitter, everything other people have written about me, private messages hacked from a friend’s email account (luckily mine was more secure), and police reports from all the times he tried to get them to arrest me.

This guy also claims the police should arrest me for “hate crimes” against him as a white male.  I wasn’t aware he had made police complaints until he brought them to the court. It’s astounding.

I’m in court tomorrow. Stay tuned for the report back about the hearing. If the court won’t strike his claim, I will have to go to trial with the loon. I’m representing myself.

UPDATE August 4: the hearing was only half-finished in June. The wingnut has the opportunity to present his side next but so far he won’t confirm a date to do that. My next trick would be compelling him to meet his date with destiny.