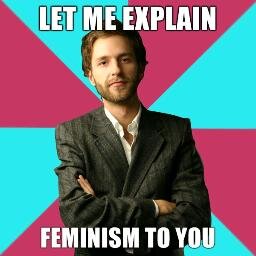 Privilege-denying dudes. They’re everywhere, including in our social justice collectives and alternative media groups. Some are dangerous, some are abusive, and some are just enablers. In the last ten years, I’ve probably butted heads with all of them.

Got privilege-denying dudes? It’s not always obvious, because they know the language of anti-oppression. The difference is, they use it to manipulate others and hide their motives. Bad faith is the key indicator that your dude is a abusive piece of shit.

But these pieces of shit do have their uses. The worst offenders – the violent sociopaths – provide a handy litmus test. They draw out the smarmy suckups who chime in to defend the asshole’s “right” to abuse women. Without this support, the sociopaths wouldn’t be half as successful at what they do.

Simply removing an abuser won’t cure a PDD infestation, because the contagion infects the others: you may find your activist work has become a gender minefield full of hidden booby traps, and your comrades’ loyalties are divided between punching down on women and preserving the status quo. It’s better to just walk away.

The litmus test instantly shows whether your sincere-sounding dude is actually a sexist jerkoff, and whether your white-male-dominated collective deserves another minute of your time.

In Vancouver, my litmus test was this misogynist woman-beater who stalked me for about a year. He came to my workplace, he came to my volunteer gigs, he would appear suddenly on the street and tackle me. I wasn’t the only one he attacked; several of us were getting the same treatment around the same time.

After the third or fourth time the stalker knocked me down, my world divided in two. Places where he was banned (there were several), I could relax and hang out. Places where he was welcome, I had to avoid. I started carrying a weapon every time I left the house. I was wound tight, watching for him, waiting for him to hit me again. I was pissed right off.

It was no secret this guy was going around attacking women. He did it in public places, in front of lots of witnesses, and the women he attacked complained loudly. But the men who acted like they were in charge of certain activist groups still welcomed him despite our protests.

Several enablers explained to me earnestly that their hands were tied. There was nothing they could do about the stalker. They couldn’t exclude him, because that would violate his rights. This is an inclusive space, they assured me. We can’t exclude people. But if you don’t feel comfortable, you can leave. I did.

In another collective, the alpha males went out of their way to help the stalker get at me. It was entertainment to them. They invited him to a large public event where I was volunteering. I will never forget their faces when the stalker showed up and made a beeline straight to me. They enjoyed it. They watched every move, grinning and baring their teeth. They taunted me and egged him on. That was enough of that; I was out of there.

In a way, I should be grateful to that stalker. If it wasn’t for him, I might still be working with those ignorant suckholes. The stalker is a sociopath, and I don’t expect anything better from him. But it was a shock to witness men I thought of as comrades shitting all over me and the other women in the collective. (The stalker was also harassing the others, and they left soon after I did.)  Solidarity, for these assholes, meant using women however they liked, and mocking us when we complained.

Fast-forward: A 66-year-old political candidate was convicted of sexually assaulting a young teen. This creep has a huge hate-on for me because I told the world about his criminal record. So he’s my new litmus test.

A self-styled “media activist” in Victoria BC invites me to work as a volunteer fundraiser for  “his” collective. When I ask, media dude says the creep isn’t a group member yet, but he’s welcome to join anytime he wants. It wouldn’t be ethical to exclude him, you see.

What about adopting policies to protect volunteers? No, no, never mind that – what dude-man really wants to hear is more about the harassment, please. Dates, times, witnesses, detailed descriptions of exactly what the creep said and did, and physical evidence (tape recordings, if possible). He needs to know all this so he can judge me. It’s for my own good. After all, he explains, I’m probably just paranoid. And if I’m so afraid of the creep, why don’t I just call the police? I tell him to fuck off and find someone else to exploit.

A longtime peace activist at a mini-conference in Vancouver explains that they hired the creep before they knew he raped a child. But they can’t exclude him now – it’s illegal to discriminate against people, you know. Does the peace group have a human-rights policy? A safe-space policy? Any procedures to address harassment? No, they don’t.

This activist isn’t a dude – she’s a woman in her 60s. Surprise!

By her logic, if Baby Doc Duvalier shows up, she’s obligated to let him join. If the Young Conservatives, StormFront and the entire Canadian Armed Forces door-crash this peace group, they are welcome. Right, dudette?

It’s frustrating to explain the blindingly obvious to someone who should know better, but I’m giving it the old school try:

What I’m hearing from your letter is that you believe the group can’t “legally” exclude someone they would prefer not to work with. But any group, non-profit, club, committee, or ad hoc organization has the right to choose who to admit as volunteers and who to exclude. It is not discrimination to say “we don’t want to work with someone who raped a child and harassed another woman.”

Associations like [this peace group] are run on mutual-aid principles by like-minded people, and much of the work revolves around making principled decisions about which individuals, groups, and causes to support.

The courts have long held that “collegial” groups like yours have this right. In fact that’s a major purpose of such groups — to bring together like-minded people. It might be helpful to discuss this point with a lawyer or human rights advocate if it is not clear.

I follow up with the suggestion that “inclusion” means creating spaces and policies that support diversity and human rights, not providing a safe haven for creeps. That was five years ago. I’m still waiting for a response.

We don’t just have the right, we have the obligation to exclude those who don’t share our principles or who cause trouble.

At this point, I have some questions for the privileged dudes (and dudettes): What the hell do you think we’re here for? Is this a social justice movement or a mutual admiration society? Is our movement so desperate that you need to recruit any sexist creep or child-molesting dirtbag who comes along? Aren’t you concerned that this predator might be using you to find more victims? Are you so afraid of rocking the boat that you won’t even try to protect your own friends and comrades? What kind of “activists” are you?

Have you heard of the global war on women? Are you aware that hundreds of thousands of women are murdered by husbands, fathers, boyfriends, and strangers every year? Did you know that millions more women and girls are raped, molested, and terrorized? That gender violence is a weapon of war and social control? Do you believe that peace and justice includes peace and justice for women too?

Do you think being “nice” and “inclusive” is going to stop this shit? It won’t. You know what stops it? Stopping it. Let me show you how.

Dudes who feel the need to jump in with a privilege-denying comeback should consider the following:

2.      Don’t tell me I’m giving feminists a bad name. In fact, don’t tell me anything about feminism, jackass.

3.      I don’t need to forgive anyone, and I’m not going to apologize. The abusers are the ones who need to apologize — to me, and to their other  victims. Until they demonstrate some real remorse and a change in attitude, they’re my enemies.