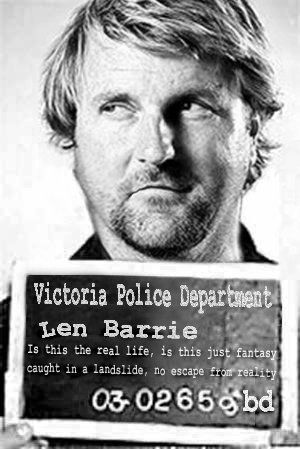 VICTORIA BC — Disgraced Bear Mountain developer Len Barrie has pleaded guilty to tax charges in a BC court as he continues his karmic slide into oblivion.

Just five years ago, Len Barrie was golden – “living the dream,” as one newspaper reported. That dream has turned to dust, along with the millions he owes to everyone from day labourers to the government of Canada.

Len Barrie was once known for his mediocre NHL career, but his real fame comes from the antics that won him the title “Vancouver Island’s most racist developer.”

The McMansion that Barrie built in his brief heyday sold last week for a $10 million loss. The resort he boasted would be worth $3.5 billion was repossessed by the bank for a $300 million debt and now is up for sale. Word is it may go for as little as $50 million.

In laying the foundation for his resort fiefdom, Barrie chose confrontation over diplomacy. He drew the anger of local First Nations by destroying indigenous heritage sites and ignoring provincial guidelines on heritage preservation. Under his direction, builders bulldozed and blasted caves, cairns and gravesites that were used and tended by indigenous groups for hundreds of generations. He dispatched goon squads to assault and intimidate protestors, and filed a million-dollar lawsuit against indigenous activists who sought to protect the mountain they call SPAET.

The first sign of the impending collapse at Bear Mountain came when nearby residents noticed work had halted at the interchange intended to link the resort to the TransCanada Highway. Soon after, we learned that Bear Mountain, which was responsible for the majority of the cost of the interchange, had defaulted on its payment to the city of Langford. It is not clear whether the resort ever made good on its debt. In any event, four years and millions of dollars later, the “Bridge to Nowhere” is a roundabout, and only a rutted overgrown track leads up the mountain to the resort.

In 2010, as his ill-fated empire crumbled, it emerged that Barrie had fleeced a raft of investors, including $13 million from fellow hockey players. Over a hundred smaller creditors were also bilked, including contractors, windows installers, concrete suppliers, plumbers, and general labourers.

It is small consolation that Barrie is in the same boat. His family trust was wiped out and all his properties are in foreclosure. At last report, he was living in Youbou near Cowichan Lake, in a modest house that was foreclosed but not yet seized by creditors.

In addition to the tax charges, the RCMP is investigating allegations of fraud relating to auditor reports that Barrie improperly diverted $16 to $20 million from the resort to purchase the Tampa Bay Lightning. The hockey team was sold a year and a half later for an estimated $80 million loss.

Court documents filed in 2011 allege that during this time, Barrie gambled and lost almost $2 million at the Bellagio Hotel and Casino in Las Vegas. The casino filed suit when Barrie’s credit payment was refused by his bank.

Eight years after embarking on his development career, Barrie has lost everything. His reputation is irrevocably tainted by greed, arrogance, defaulted payments and broken promises.

Developers and hockey pros across Canada, take note: Don’t be that guy.

Update: In March 2014, the Boardwalk Regency hotel and casino in Atlantic City, NJ filed its own claim against Barrie. More details to come.