Obit for a Spotted Owl

A northern spotted owl found injured on a BC highway two weeks ago may be the last nesting female in Canada.

On October 28, a work crew driving through Manning Park in southern BC came across an owl sitting in the middle of the road, alive but unable to move. The workers stopped, put the bird in a box and delivered her to an owl rehabilitation centre in Oliver, BC. 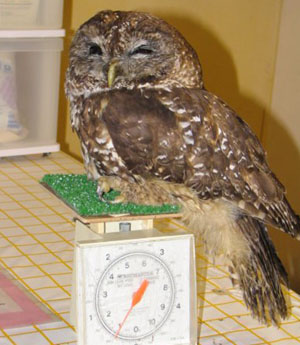 Weighing just one pound when she was rescued, this female spotted owl was starving.

Sherri Klein, founder of the South Okanagan Rehab Centre for Owls, was astonished to find the bird in her care. In 20 years of caring for sick and injured owls, she had never seen a northern spotted owl. This past spring, researchers estimated 17 owls were living in old-growth fragments of BC’s heavily-logged southern forests.

Experts believe the owl is the female of the pair nesting in Manning Park. Spotted owls are territorial and monogamous, staying with one mate for their whole lives.

The owl was too weak to stand or eat, and she was initially force-fed by SORCO staff, who also treated an internal eye injury with antibiotics and anti-inflammatories. The eye injury may have been responsible for the bird’s condition, as she had apparently been unable to hunt for some time.

“Just the procedure of force feeding the bird causes stress upon it and this alone can kill a weakened bird also. The owl is so weak that it cannot stand. This is always a bad sign, for once a bird is down, often death follows even when the best of care is given,” reported Klein.

After two days, the owl was eating on her own at times and staff were hopeful she might recover. But she did not gain weight and never recovered the strength to stand.

“The reality of it was that it was so badly emaciated that its organs had probably already started to shut down,” Klein said.

“The warmth of the food and the nourishment we gave it helped it hang on a little longer. It just prolonged its inevitable death. That’s the sad reality of it.”

The owl died at 5 am on Tuesday morning.

“This is a great loss indeed and it has left us wondering if there was something we could have done better,” Klein writes.

Andy Miller, a spotted owl expert with the Western Canada Wilderness Committee, documented three active spotted owl nests in BC early this year. Since then, each nesting pair has suffered terrible setbacks.

First, a windstorm blew down a tree and nest in spring, killing a nestling. In the summer, Cattermole Timber logged out much of the forest at the second nest site, apparently destroying that nest. (See this GNN report.) The death of the female of the third breeding pair marks a devastating year for the spotted owls.

Eleven individual owls, isolated from each other by clearcuts, terrain and development, are estimated to be living in BC.

For years, experts have been warning of the spotted owl’s imminent extinction in Canada as logging continues in the last pockets of owl habitat in BC’s southwest corner. The BC government has played an active role in the logging by selling timber rights to small businesses.

Canada’s endangered species legislation, the Species At Risk act, contains no provisions to protect habitat on provincial land. The provincial Ministry of the Environment is mulling over a proposal to attempt captive breeding of spotted owls, a completely untested strategy. Conservationists point out captive breeding, even if successful, will not lead to the owl’s recovery if its habitat is wiped out.

One Response to Obit for a Spotted Owl