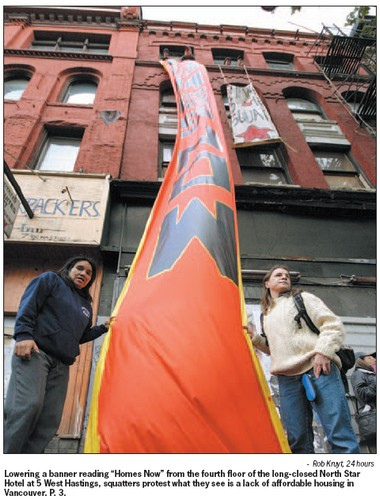 With winter coming, an army of homeless people is on the move

The number of people sleeping on the street has doubled in the past three years, and the count doesn’t include those sleeping on couches or floors, bunking in converted closets, or living in illegal and substandard rooms. Ten years ago, I was one of them.

On a cold and rainy Sunday afternoon, the Anti-Poverty Committee kicked off its latest action campaign to provide housing for the homeless. The loosely-organized group took over an abandoned downtown building October 22, while a crowd of supporters rallied outside to demand the city make good on its promise to house the homeless. “Squat!” posters were plastered on poles and boarded-up windows. “Buy It or Guard It!” the posters read.

I didn’t plan to be homeless when I came back to Vancouver from the US ten years ago. But that’s how it turned out. The situation in the US was untenable, even though I had a green card. Apparently foreign anarchists, whatever their status, are not well-received in the land of the free.

Canada would not recognize my citizenship. My birth certificate proved I was born here but the authorities refused to issue a Social Insurance card. That meant I was not eligible for employment, assistance or health care services. After a month I was broke and desperate. I camped in the woods and ate out of dumpsters for most of a year. When the weather got cold I joined a rowdy group that squatted a converted mansion at Halloween. After only three days, the police kicked in the door and we scattered.

I was one of the lucky ones – the government finally relented and I was able to get off the street. But over the years I’ve watched conditions deteriorate in the Downtown Eastside. Policy changes have forced thousands off social assistance, while landlords have evicted hundreds more from low-income residences in order to convert them to condos.

In 2003, The Anti-Poverty Committee took over the long-vacant and gutted Woodwards department store. The squatters persisted – camping out on the sidewalk – despite evictions and police raids, sparking months of conflict with the city.

The Woodwards Squat made national headlines for weeks, and helped carry the city’s nominally leftish party to victory in the 2003 Vancouver civic elections. The Coalition of Progressive Electors (COPE) literally rallied around the homeless and campaigned as the party that would solve the housing problem.

Instead, after winning the election, the coalition fell apart. Two years of faction fighting split the party (“COPE and COPE Light”), but there was no increase in social housing in the city. (To its credit, the COPE city council struck a deal with the province and investors to redevelop Woodwards, but it will provide only 200 units of low-income housing, alongside 500 market-priced condos.) More low-income residences closed and provincial welfare cuts went into effect.

In 2005, The Non-Partisan Association (NPA) beat COPE and its spin-off, Vision Vancouver, to take the majority on city council. The NPA, led by mayor Sam Sullivan, promised to buy a vacant downtown building every year and convert it to social housing. One year later, the city has made no move toward fulfilling its promise.

On every downtown street, people sit on sidewalks holding out cardboard signs, cups, hats or their bare hands. At the corner of Commercial and Broadway a group of young people and their dogs has been living for months on the pavement outside the commuter train station. Tourists and the well-heeled complain that one can’t avoid the legions of people begging and sleeping on the street downtown.

But the police budget has grown, and a crackdown has begun. Three years ago, the Vancouver police launched Operation Torpedo, the first of many sweeps promised to “clean up” the Downtown Eastside. Bike cops, mounted officers and patrol cars prowled the streets for weeks, liberally enforcing a “zero tolerance” policy. Hundreds of people were arrested, cited or harassed for everything from jaywalking to vagrancy. Recurring charges of police brutality, including recent civilian deaths at the hands of police, continue to antagonize the local residents.

From bad to worse

Pivot Legal Society recently surveyed 114 low-income residences in the Downtown Eastside and found only one room available at the welfare rate of $325 a month. Homeless shelters like the Salvation Army and the Union Gospel Mission are already full, and hundreds of people are turned away every night.

The situation is grim, but it’s getting worse. Vancouver and Whistler are hosting the Winter Olympics in 2010. The real estate market is exploding in a fever of property-buying and speculation. Housing prices are the highest in the country and still climbing. Advocates predict the homeless population will triple in the next three years, and by 2010 it could reach 10,000.

We don’t know yet how the various levels of government plan to “clean up” the neighborhood for the Olympic Games, or how they will deal with the homeless, the drug users, and (especially) security for the multi-billion-dollar spectacle. We don’t even know how much we will pay for the Games. But from here it looks like the cost is coming from cutting programs that help the poor. Social assistance. Homeless shelters. Social housing. Safe houses for battered women. The list goes on.

Winter is coming on, and people are desperate to find shelter. Life on the street is poor, nasty, brutish and short. People die each year from exposure, drug overdoses, violence, and illness. They die on the streets and in the alleys where they lived.

Back at the North Star squat, supporters maintained a vigil on the street outside, surrounded by banners and flags. Passing cars honked in agreement. Organizers offered to end the occupation in exchange for a meeting with mayor Sam Sullivan. But Sullivan refused, saying he would not meet with a group conducting an illegal action. The police, acting on behalf of the building’s absentee landlord, broke open the door to the squat on October 24.

Two hundred and fifty jeering people filled the street, surrounding the paddy wagon and the line of officers cordoning off the front entrance to the North Star Hotel. Organizers led the crowd in chanting, “Poor people under attack! What do we do? Stand up, fight back!” and “No homes, no peace!”

Jill Chettiar with APC said, “We’re telling people to stay calm, be here, and witness.” Dave Cunningham cautioned, “This is not where we’re gonna pick our fight. This is where we’ve launched our campaign.”

Six people were arrested in the squat, including Kim Kerr, executive director of the Downtown Eastside Residents Association (DERA). As each person was led out the front door, the crowd erupted into screams and cheers.

When the paddy wagon pulled away, the crowd followed on foot, marching up Hastings Street to the Vancouver police station on Main Street. Native women led the march, drumming, singing the Woman Warrior song and giving the braveheart cry.

A line of police stood guard across the entrance to the station. People took turns addressing the crowd as the group settled in to wait for the “North Star Six” to be released.

“We’re here in solidarity with the people who were arrested,” said one protestor. “We’re staying here until every last one of them is out.”

“These people blocking this building right now are the fucking terrorists,” yelled one young man, pointing at the police. “These people like to kidnap people and throw them in vans and fucking torture people.”

“We’re peaceful! This is about as peaceful as it gets in Canada!” the man shouted.

The North Star Six were charged with assault by trespass, an indictable offense that carries a maximum penalty of five years in jail. But legal observers note the charge does not apply to peaceful protests where no assault has taken place. The charges will likely be dropped.

In Victoria, a squat in solidarity with the APC lasted only a few hours before riot police lobbed tear gas into a vacant building to evict a single remaining protestor. Victoria, the capitol of British Columbia, is facing a housing crisis similar to Vancouver’s, along with a similar lack of funding from the provincial and federal govenment to address the shortfall.

Craig Ballantyne was charged with mischief October 23 after the police battered down the door to a second-story room at the Janion Building, a former hotel in downtown Victoria that has been vacant for over 30 years.

The squat was organized by Communities Solidarity Coalition and Together Against Poverty Society. Next the groups will go after BC Premier Gordon Campbell, who led the charge to slash housing budgets and social assistance.

“I think we need to get the point across to the representatives of the municipalities that housing has to take precedence over things like the Olympics and highway development. It’s an urban issue and it’s a social-justice issue, let’s just deal with it first and provide housing for the homeless,” organizer Art Farquharson said.

“You can have your Olympics, but let’s get the basic stuff first.”

Meanwhile, the Anti-Poverty Committee is planning the next squat in Vancouver. Organizers are tight-lipped about the location and timing, but the group is bringing its protest to City Hall on Halloween. Downtown Eastside residents will be bused to the City Council meeting to press their demands in person.

Chettiar said the city made a choice to escalate the conflict instead of meeting with housing advocates.

“If they want escalation, we’re going to fucking deliver,” she said angrily.

Lily Loncar of DERA said between the housing crisis and the police crackdowns, residents and the homeless are up against a wall.

Tagged as Most Popular, Politics

One Response to Squat or Die