My Dinner with the Prime Minister

As always, it was a last-minute date. The Prime Minister likes to be spontaneous when he shows up in Vancouver. And when he’s here, he’s very shy and prefers to avoid crowds. I got the call only the day before. 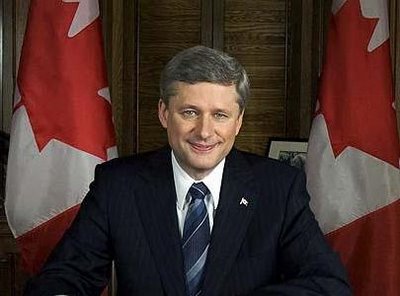 Nevertheless, I went to meet him. I had the same kind of relationship with former PM Jean Chretien – he would stay at a high-priced hotel downtown, and I would ride the bus in to give him a little message from the heart. But it didn’t work out with Jean, his staff always interfered, and I felt I was never really able to reach him.

With Stephen, I hoped it would be different. Dinner was set for the Floata Restaurant in Chinatown. Stephen was meeting with Chinese businessmen on the subject of freeing up trade restrictions between Canada and the People’s Republic. A lovely, intimate setting – not some huge anonymous ballroom filled with party hacks. Maybe I’ll get to practice my Cantonese, I thought.

I rode the bus down to Chinatown, but when I arrived at the Floata Restaurant, the entrance was blocked by a crew of enthusiastic young folks in white t-shirts and name tags. Security men in black suits and sunglasses lurked in the dim lounge, muttering into radios. I went around to the parking entrance.

That entrance was blocked by the Stephen Harper Welcoming Committee, a rowdy bunch of troublemakers from No One Is Illegal, the Anti-Poverty Committee, and the Association of Chinese-Canadians for Equality and Solidarity.

The crowd of about 75 had flowed out into the street and around a red SUV stopped at the light. The SUV driver immediately flipped out, screaming and honking his horn. A reporter took a picture. The door popped open and the driver lunged out, grabbing the reporter by the neck and trying to take him down. Other folks in the crowd pulled the bellowing driver off the reporter and manhandled him back into the SUV, where he continued to honk and holler. A couple police officers who had witnessed the scuffle strolled over and suggested the crowd let the driver go through, which they did. The reporter – a young man named Eric, writing for the Ming Pao daily newspaper – wasn’t hurt, but his glasses were broken.

A few minutes later, the police were herding people off the street by forming a line and pushing. Some refused to be herded and pushed back. The crowd thronged around the entrance, onto the sidewalk, back onto the street. Things were tense. Stephen isn’t going to like this, I thought.

As it turned out, Stephen arrived in his usual motorcade of black cars with black tinted windows – but he dodged into the alley and ducked into a side entrance to the restaurant. I tried to follow, but the door slammed shut. Heartbroken, I pounded on the glass, calling his name. Calling him names. The activists had a bullhorn and some rousing chants, so I joined in.

Later, nursing my disappointment, I learned that only the day before Stephen had announced sweeping cuts to social programs, many of them already decimated by Jean’s cuts and attrition. Women’s programs, literacy programs and more. If only I could talk to him, I mused out loud.