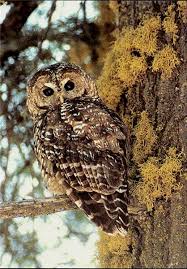 In the race against time to save Canada’s only population of Northern Spotted Owls, a wilderness biologist reports a disturbing setback.

British Columbia conservationists charge the government is handing out permits to log the last remaining habitat for the spotted owl in Canada. BC’s Timber Sales Program grants licenses for small logging operations, allowing local companies to clearcut where Big Timber fears to tread. The timber sales target the valuable remnants of old-growth forest in southwestern BC – the same forest the owls require to survive.

Decades of logging and development have left fewer than two dozen owls in BC’s fragmented landscape, and only two nests have been documented this year. Earlier this month, researchers found a Cattermole Timber logging operation at one of the nest sites.

“It was a sad sight,” commented Andy Miller, a leading spotted owl biologist with the Western Canada Wilderness Committee. “With all these small areas of felled trees dispersed over the hillside, I can only hope and pray that the company did not cut down the owl’s nest tree.”

“Why would a logging company purposefully fall trees in an area with a documented nest of one of Canada’s most endangered species?” Miller asked.

In early July, Miller got a close look at the mini-clearcuts in a remote area of the Anderson Valley north of Hope, BC. “It appears that this covert logging operation was not completed, and that the loggers quickly abandoned the site for unknown reasons.” Trees were felled but not hauled out, he said.

The old-growth groves in the Anderson Valley are not accessible by road. The logging crew apparently came and went by helicopter.

Cattermole Timber spokesman Ted Holtby and Chilliwack District Forest Supervisor Kerry Grozier deny any wrongdoing, and a provincial official says logging has been suspended pending more surveys to determine if any owls remain in the area. Kevin Jardine at the Species At Risk Coordination Office said Cattermole Timber was asked in April to voluntarily suspend logging in the area, in return for logging rights in other timber stands.[1]

Holtby is angry with the conservation group about what he calls “misinformation.” Holtby said the company is financially pressured by court delays and the costs of preparing the grove for logging, which have already hit $60,000.[2]

“There’s no way to recoup that money and the government isn’t going to cut us a check,” Holtby said.

Experts have predicted Canada’s spotted owl population will be extinct by 2010.[3] The loss of a nest site this month stacks the odds against new chicks hatching next year and in the future.

The clearcuts at Anderson Creek may prove to be the last step on the path to extinction for Canada’s spotted owls.

Cattermole Timber has a history of government-approved logging in spotted owl habitat. In 2004, the company cleared an old-growth grove where spotted owls were documented near Chilliwack, BC, over the vigorous protests of environmentalists. The district’s Forest Development Plan has already approved more clearcuts at the Anderson Valley and Chilliwack sites.

Endangered species have no protection under BC law, and the federal Species at Risk Act only applies to federal land, not provincial forests. WCWC and four other groups, led by Sierra Legal Defense Fund, are currently pursuing a judicial review in the Federal Court of Canada, asking the Environment Minister to intervene and protect the spotted owl. But it is a faint hope; unless Ottawa invokes the emergency provision of the Act, there is no way to compel the province to save the owl’s habitat.

In fact, provincial officials have tried to spin the clearcuts as somehow beneficial for the owls.

Cindy Stern of the South Island Forest District of the BC Ministry of Forests was responsible for the 2001 decision to allow Cattermole to log in spotted owl habitat. In that decision, and in a subsequent CBC Radio interview defending it, Stern stated the logging might actually enhance the habitat of the owl, and “thinning” the forest could boost the numbers of flying squirrels, the owl’s favorite prey. Further, she said, by logging the owl’s habitat, the province could gather valuable data on the environmental impacts of such logging.

Stern’s reasoning contradicts reality. Spotted owls rely exclusively on forests over 125 years old, and cannot adapt to younger forests, where they are out-competed by other species. Studies^[4]^ on the environmental impacts of logging in owl habitat demonstrate – even with selective harvesting – that habitat loss equals population loss. Conversely, the owls are an indicator species for healthy forests; the loss of spotted owls in southwest BC marks the loss of interior old-growth ecosystems in the region.

After Stern approved the logging plan, WCWC launched a court action to prevent Cattermole Timber from logging the Anderson Creek grove. The BC Supreme Court granted a temporary injunction putting the timber harvest on hold, but in August 2002 the case was dismissed. Justice Shabbits stated in his decision that BC’s forestry laws do not protect the spotted owl from extinction. According to Shabbits’ ruling, “it is currently a matter of speculation or argument whether timber harvesting might improve or enhance owl habitat.”

The ruling disregarded the conclusions of the Ministry’s spotted owl recovery team, which recommended logging be suspended in owl habitat so the population could recover.[5]

Experts question why the province refuses to accept the conclusion of its own scientists, and why it instead chose to fund a logging consortium’s effort to discredit the report. In 2003, the Ministry of the Environment handed out $247,000 to the Fraser Timber Supply Area Cooperative Association to “review” the science panel’s data. The province later shelved the report along with the possibility of habitat protection for the owl.[6]

While logging continues in the old-growth forest, the province has announced a new recovery plan that relies on unscientific experiments rather than habitat protection. Spotted owls have never bred in captivity, but BC proposes to capture owls and attempt to get them to mate in a cage. This plan is likely to fail, just as a similar owl capture program failed three years ago.

In the winter of 2002, government biologists snatched a baby owl from the wild and kept her in a cage with a good food supply until spring. In 2003, she was released in the forest near a single male so the two could mate and raise a brood.

It didn’t work. The baby owl, named Hope, survived the winter but died shortly after release. Reportedly, the single male already had a mate, and the two drove the young owl out of the old-growth forest. Without hunting skills and adequate cover, the owl starved to death.

“If the B.C. government truly intended to save the owl, it would protect enough habitat for recovery of the species,” Page said. “You’d have to protect all the remaining old growth.”

Barlee added, “We are watching the species go extinct right before our eyes, due to government inaction and the greed of some of BC’s logging companies.”

4 Blackburn, I. R., 1991. “The distribution, habitat selection and status of the Northern Spotted Owl in southwestern British Columbia, 1991.” (Unpublished report, BC Ministry of Environment, Lands and Parks, Wildlife Branch, Surrey, BC.)

Tagged as Eco-defense, Most Popular, Politics

One Response to Killing Spotted Owls with Chainsaws