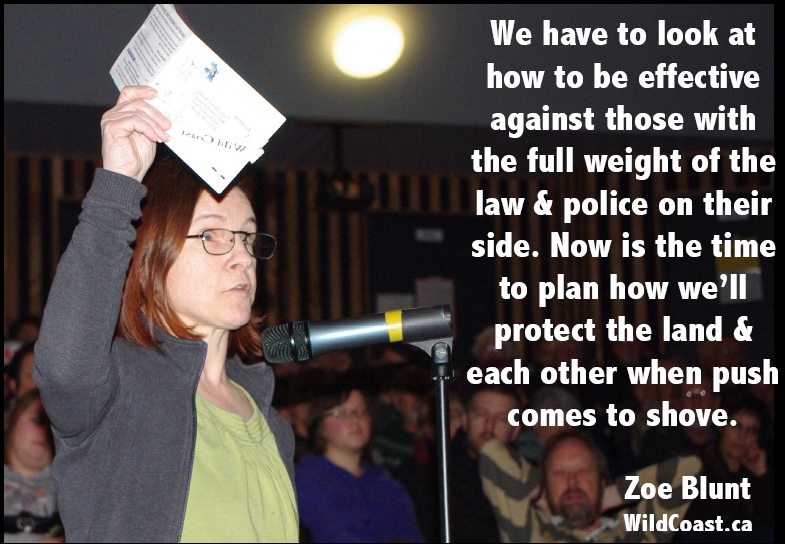 In every part of the province, industry is laying waste to huge areas of wilderness – unceded indigenous land – for mining, fracking, oil, and hydroelectric projects. This frenzy of extraction is funneling down to the port cities of the Pacific and west to China. In 2014, Prime Minister Harper stripped away all legal recourse for environmental defense by signing a new resource trade agreement with China that trumps Canadian and local laws and indigenous rights. Not even a new government has the power to change this agreement for 31 years.

For mainstream environmental groups (and my lawyers, who were in the middle of a Supreme Court challenge to the trade agreement when Harper pre-empted them), it is a total rout. We are used to losing, but not like this.

The only light on the horizon is the rise of direct resistance. BC’s long history of large-scale grassroots action (and effective covert sabotage) is the foundation of this radical resurgence.

But the question hangs over us like smoke from an approaching wildfire. How to stop it? The courts are hogtied. The law has no power. The people have no agency. This government simply brushes them aside and carries on. We get it. We’ve had our faces rubbed in it. This is activist failure. The phase of the movement when most of the public is already on side, when we have filed all the lawsuits, taken to the streets in every city, overflowed every public hearing, and uttered every legal threat we can muster – and the end result is they are bulldozing this province from the tarsands straight to the coast.

This is the moment when we can expect activists, especially mainstream enviros, to become demoralized and quit. Or start on a campaign of self-delusion: Green groups are casting about for a strategy that will allow their donors to maintain false hope in a democratic solution. Election campaigns, for example. Some are still trying to raise money for legal challenges that were overruled by the treaty with China. But small cadres are preparing the second phase of the resistance. Indigenous groups are reclaiming territory and blocking development at remote river crossings, on strategic access roads, and in crucial mountain passes. Urban cells are locking down to gates, vandalizing corporate offices, and organizing street takeovers.

It’s a good start. But now we have to look at how to be effective against powerful adversaries with the full weight of the law and the police on their side. How will we protect the land and each other, when push comes to shove?

The new rules don’t change our strategy to bring down the enemy: kick them in the bottom line. The resource sector will wind tighter as competition to feed China intensifies. Or conversely, we expect the industry will become even more desperate as demand and prices fall. Profits are slim enough to start with – made up in volume – and investors are jittery already.

Either way, it’s a fight to the death.

We urge our allies to heed the lessons of history. We don’t win by giving in or turning on each other. Tenacity, focus, flexibility, and diversity of tactics will turn back the invaders.

Celebrate the warriors. Raise that banner now, and we’ll find out soon enough who’s with us, and who’s looking to appease our new dictators.