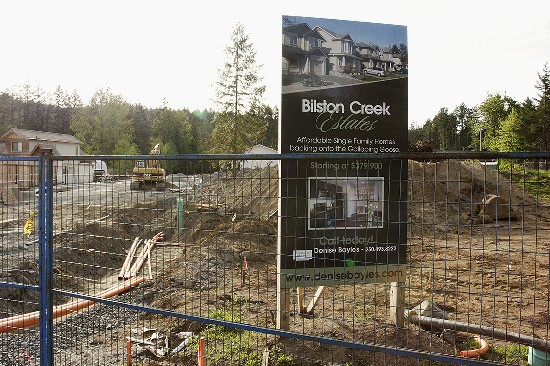 Langford’s farmers, food lovers, and political decision-makers are struggling with the dilemma of farmland preservation

Along Bilston Creek, fat mallards flap and quack over a willow thicket and red-winged blackbirds perch on cattails to sing their spring songs. Nearby fields are dotted with blackberries, horse paddocks, and hay bales. But public notices on Happy Valley Road warn that new housing developments are on the horizon, and these farmlands and wetlands are getting squeezed by creeping urbanization.

For years, Langford’s fast-growth policies have put the city squarely at odds with local food and farming advocates. The current development applications may also violate provincial rules and Langford’s own land-use guidelines.

Critics of growth-at-any-cost are responding by forging their own vision for the future of farmland and appealing for community support to make it a reality. According to Ian McKenzie, owner of a small farm in Happy Valley, the strategy seeks to promote positive solutions, rather than more head-butting with Mayor Stew Young and Langford city council.

Home-grown solutions are needed. Vancouver Islanders are snapping up more local produce than ever before. Cheryl McLachlan, an avid local food consumer and Langford council-watcher, says demand at farmers’ markets is outstripping supply. “The joke is, at some of the weekly markets, you have to get there before 11:30 or there’s no food left.”

This spring and summer, local residents are flocking to events like Defending Our Backyard, a celebration of local food on May 31 at Fort Rodd Hill. The Island Chefs Collaborative expects over a thousand people to attend. Up in the Cowichan Valley, wine-tasting tours are a going concern. Across the South Island, restaurants compete for bragging rights about the advantages of their local, organic ingredients: superior flavour, freshness, and nutrition content. The popular Hundred Mile Diet has gained a huge following from books, blogs, and news stories in the past year. Grocery stores proudly market “BC Grown” and “Locally Grown” produce.

A harsh reality confronts this cornucopia, however: Vancouver Island grows only about five percent of its food. In the event of a crisis, the supermarkets and grocery stores would run out of many basic supplies in ten days or less. Farmer McKenzie notes, “At the moment, we depend on the transportation system and the economic system to get our food from outside our area. If Vancouver Island were hit by a tsunami—if, all of sudden, the ferry terminals were knocked out—it would take a month to repair the docks. So at some point, we’re going to have to accept we have to produce more of our food ourselves.”

Langford is taking steps to address the issue, at least on paper. Food security gets high priority in Langford’s new Official Community Plan. The guiding document for planning and development is peppered with sweeping statements promoting local food production and sustainability.

Easier said than done. Rhetoric aside, Langford politics have taken root in the farmlands like tenacious weeds. Most of Langford’s agricultural land is in the Agricultural Land Reserve (ALR), a provincial program designed to protect local food production. Overseeing the ALR is the Agricultural Land Commission (ALC), which considers applications to designate or remove properties from the ALR. The agency’s mandate for preservation means the rules for removal are strict. A successful application typically demonstrates a “net benefit” to farmland overall—a tough criterion to meet. With only 292 acres remaining in the reserve in Langford, and much of the arable land already lost to development, the municipality must find creative ways to pair removal applications with plans to intensify agriculture in other areas.

McKenzie has some ideas on how to do this. “We’re looking at more intelligent use of farmland, including parcels that are part agricultural and part other use,” he says. Rocky or sandy areas can be used to build housing for farm workers, while the remainder can be worked with the latest high-intensity farming methods. Marginal soils can be remediated. “That will fulfill the ALC requirement for net benefit,” McKenzie says.

Applying to remove land from the ALR without proposing tangible benefits to farmland, McKenzie says, “defeats the whole purpose of having local food production and food security.” And those applications are not likely to be approved by the province, according to other observers. 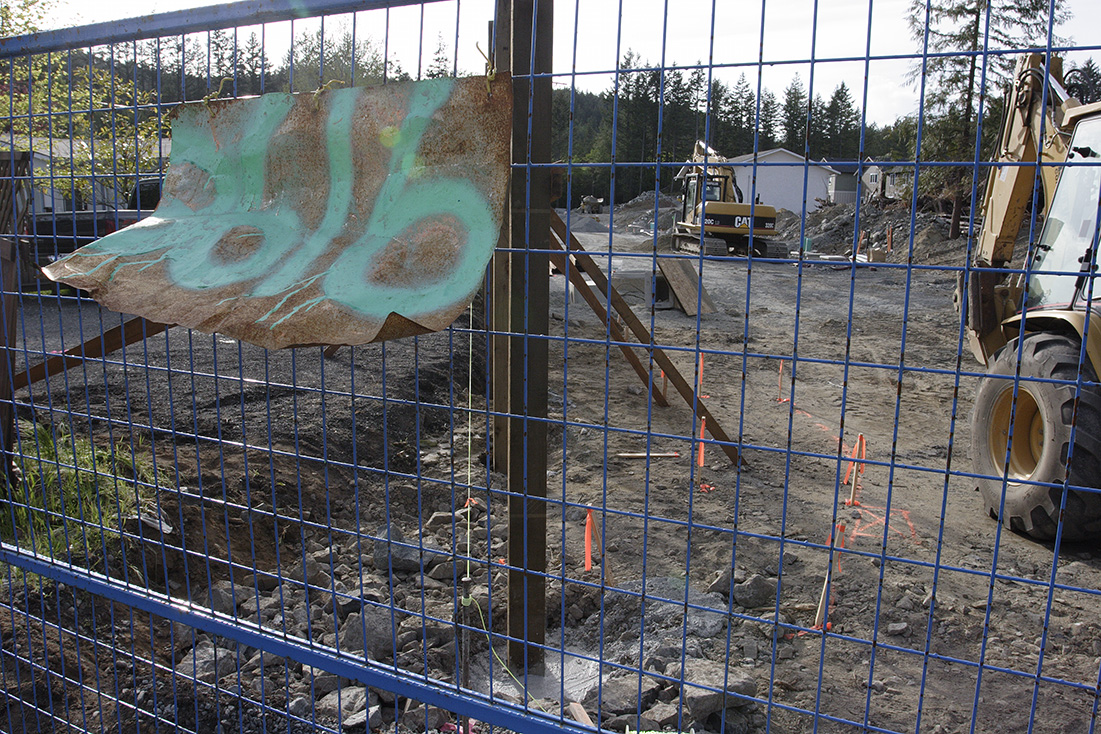 At times, Langford’s land-use strategies have clashed with the provincial agricultural commission’s requirements. In 2006, the city touched off a storm when it sent a letter to every landowner with property in the ALR, advising them that the city would help them apply for removal. That letter was followed by heavy backpedaling and a second letter clarifying that there would be no “blanket removals” of ALR land. Rob Buchan, Langford’s clerk-administrator at the time, stated that the offer was merely part of a process to create a neighbourhood plan for South Langford. He told the Times Colonist that the city would consider “supporting the removal from the ALR of those lands that are not useful for farming.” As for the future of the process, “It’s very much going to be driven by what the residents have to say,” Buchan said. Cheryl McLachlan supports that notion. “Langford is a growing community, therefore it has to do more due diligence to protect the ALR land that’s left.”

So far, efforts to achieve due diligence and citizen guidance have fallen on rocky ground. Residents were cheered when Langford city council appointed an advisory committee earlier this year to assist with land-use planning and accountability. The Agricultural Advisory Committee had to hit the ground running—currently, 11 landowners are applying to remove their lands from the ALR. In announcing the inaugural meeting of the committee in January 2009, Mayor Young promised, “It’s not going to be an easy process, but it’s going to be a fair one.”

Mayor Young may be half right. McLachlan attends most of the city’s committee meetings, and she and others are raising concerns about the advisory process. Citizens’ letters to the committee were rebuffed by city planner Matthew Baldwin, who politely but firmly told residents to write to the provincial Agricultural Land Commission instead, since “the decision whether or not land is removed from the ALR rests solely with the ALC, and not with Council for the City of Langford.”

Debra Harper, a local food advocate and Langford resident, was so irked by her exchange with Baldwin that she posted his “rejection letter” on her website. Baldwin later admitted that city council does, in fact, decide whether to forward applications to the province, and it can effectively veto the proposals, but he has failed to address citizens’ grievances about the way he handled the situation. Among the letters were submissions from local farmers with information about farming techniques, local soils and drainage conditions that could have helped guide the committee, which does not include any local food producers, McLachlan says.

Adding insult to injury, at least eight of those letters were also missing from the package given to city council for its final consideration of the ALR applications on April 20, 2009.

Another surprise awaited attendees at the April city council meeting. Reading the agenda, they noticed that one of the advisory committee members had the same last name and first initial as a landowner applying for removal of his land from the ALR. When questioned, Mayor Young confirmed that Mr Thomas Atherton of Happy Valley Road had, in fact, voted to bring his own application to council.

Turning farmland into housing developments typically brings a windfall profit to the landowner, and those responsible for advising governments on land-use decisions are expected to be impartial, with at least an arm’s-length distance between applicants and deciders. Langford’s terms of reference for the committee state emphatically that “no member of the Agricultural Advisory Committee shall have an active application before the committee.”

Even after McLachlan raised the point about this potential conflict, Mayor Young and Langford city council voted unanimously to forward seven applications—including Atherton’s—to the province for removal from the ALR. The final decision now rests with the Agricultural Land Commission.

Meanwhile, McKenzie is preparing a presentation for Langford council on the community’s vision for the future of farmland in Happy Valley.

Agricultural work is a big part of lots of people’s lives, he says. “We’d like to see urban planning that takes into account the importance of farming—the necessity of growing food. ”

McKenzie is hopeful Langford’s rhetoric will someday match up with its actions. “I think they’re sort of grudgingly admitting they have to have some sort of a plan for agriculture, but I think at the moment they don’t give it the same importance as other types of land development,” he says.

As you sow, so shall you reap. Chris Johnson, a local food advocate in Victoria, says disappearing agricultural land is an urgent problem. “At the rate things are going,” he says, “I hope our children can figure out how to eat carpet and plasterboard.” 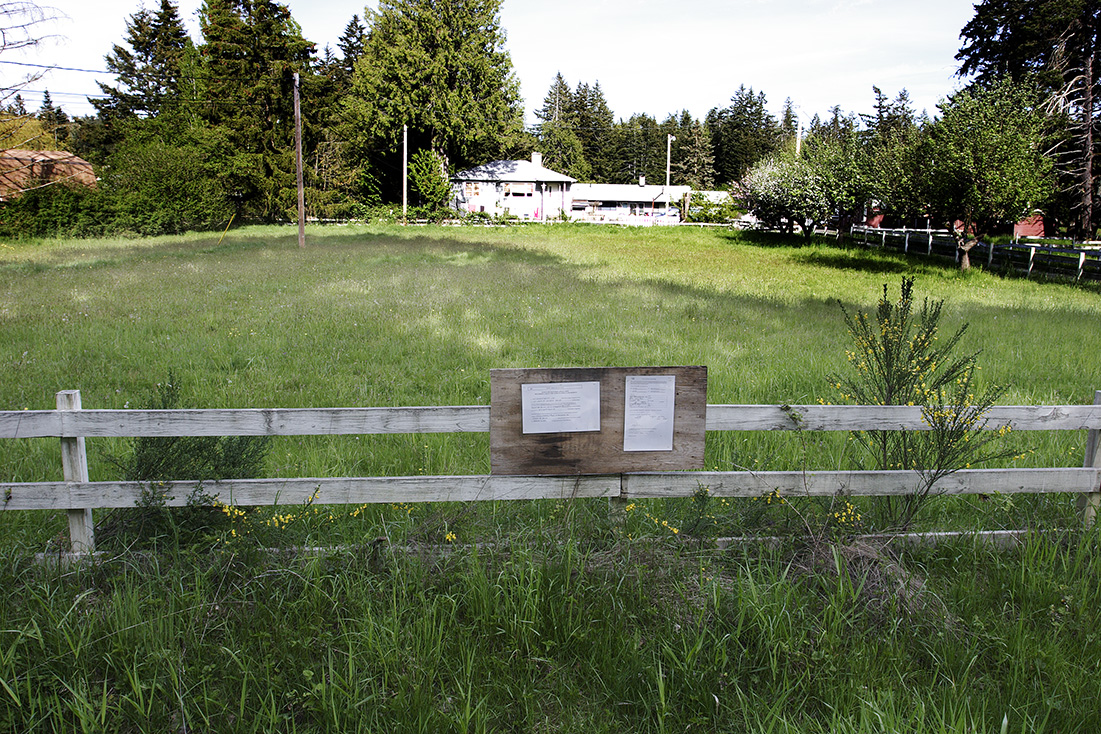