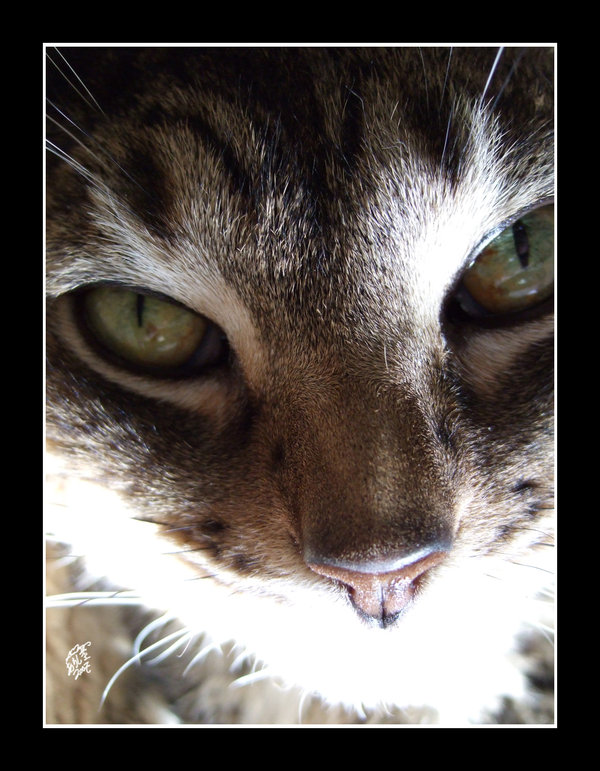 Ms. Rosie Haywire, my faithful friend and cat companion for the past seven years, died today after a brief but brave battle with congestive heart failure. She was only nine years old, and she will be fondly remembered for her strong spirit and love of big trees.

In 2007, Ms. Haywire traveled with us to the Wild Earth camp at Hadikin Lake, where she took to living in the rainforest like she was born to it – stalking through the underbrush, scrambling up fallen logs, and patrolling the trails with her tail held high. She easily won the Hide and Seek championship, skillfully eluding a team of increasingly-desperate searchers for six hours after the campsite was packed up.

At the age of six weeks, Rosie the kitten came to live with my grandmother, an evil woman who beat her regularly with a broomstick. Rosie would retaliate by shredding her legs and the furniture. I kept offering to adopt her, until finally the old woman decided she’d had enough and sent Rosie to live with me. Now a large, muscular cat, Rosie remained fierce and wild — she bit and scratched, and I couldn’t pet her at all unless she was in bed under the covers. It took a year of gentle coaxing before she would sit in my lap and purr. When people came to visit, I would joke about her bad behavior, calling her “Post-Traumatic Stress Kitty” as she glared at the newcomers and hid behind the door. It’s only in the last couple years that she got over her shyness and her fear of brooms.

Ms. Haywire earned her adult name from a series of misfortunes. She fell off my third floor balcony in 2003 while having a seizure. Even though she was not badly injured, my mother and aunt urged me to have her put down. I had the luxury of ignoring them, thanks to a small inheritance from Grandma. That money went to fixing the cat’s broken foot and diagnosing the seizures. Once she was fully recovered (minus a front tooth), Ms. Haywire took another dive off the balcony, but this time she landed on the grass and only had a few bruises. Around this time we started calling her “Spazz Kitty.”

A few years later, the seizures returned. Full-blown, grand mal seizures — first daily, then hourly, then every twenty minutes. This went on around the clock while we kept increasing the dosage of her medicine. This time, I couldn’t afford the animal hospital fees, and after day and a half of almost-constant seizures, the vet told me the only thing to do was to put her to sleep. I said no. The next day the medicine finally took effect and the seizures stopped. Ms. Haywire expressed her love and gratitude nearly every waking moment for weeks after, bounding joyfully to the door when I came in, rubbing herself against me, purring loudly, touching my face with her paws, and kneading my lap at every opportunity.

Three months ago, we moved into a small cabin surrounded by big trees, squirrels, deer, and birds of all kinds. Ms. Rosie loved it here – she spent hours birdwatching and prowling the yard, and she adored the peace and privacy of this little hideaway.

Her illness came on suddenly, as often happens. Many cats give no outward side that anything is wrong – they cover up until they can’t any longer. A couple days ago, Ms. Haywire got very quiet. She stayed in bed and wouldn’t eat. Finally I took her to the pet hospital. We were there for most of the day getting tests. An exam and X-rays revealed her chest and abdomen were filled with fluid. The veterinarian said they could take heroic measures, but the best medical care and all the money in the world probably wouldn’t save her. She was in pain, but she pushed her head against my hand one last time as I held her, sobbing, and the vet slid the needle in.

In seven years, Ms. Rosie and I were apart only a handful of times. I keep turning around to see where she is. I want to pick her up in my arms one more time and bury my face in the thick soft plush of her fur. The cabin is empty now — her bright green eyes, her heart-shaped face, and her tiny meow will never greet me again. Tomorrow, she’ll be buried on the hill behind the cabin. I won’t leave a marker, but if I did, it would say, “There will never be another cat like Ms. Rosie Haywire.”

(Special thanks to Animal Crusaders for helping to cover Ms. Haywire’s vet bill.)

One Response to Saying Goodbye to Ms. Haywire