Kwakiutl: “We are going to start fighting” 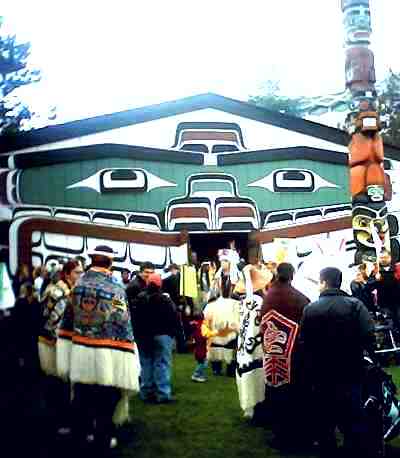 “Our world is falling apart,” Basil Ambers, a hereditary chief of the Kwakiutl First Nation, warned the crowd. “Everything we hold dear is gradually eroding away.”

“We are putting you on notice that we are going to start fighting for those things.”

The Kwakiutl and their supporters gathered in Victoria, BC on February 12 , 2007 to protest a government-approved land transfer. The deal between Western Forest Products and the province would take private land out of three Tree Farm Licenses on northern Vancouver Island, including over 1400 hectares claimed by the Kwakiutl. Almost a hundred people, most of them native, filed into the traditional longhouse outside the BC Museum.

After building a fire in the longhouse, two dozen people in tribal regalia lined up to beat drums, dance and sing traditional songs. The drummers led the crowd to the steps of the Legislature, where the Kwakiutl held a press conference.

It was a slow walk, the sun was mild and the breeze was balmy. But Andrews looked grim as he addressed the crowd: “It seems like we always have to get together because of things the white folks have done to us,” he said. “This is not the first time for our tribe, or the first time across Canada. They have been doing too many things to us that we can’t ignore.”

The hereditary chiefs, band councillors and elders, along with some of their children and grandchildren, drove from Port Hardy to Victoria to make a statement about aboriginal rights on their land. Despite promises from BC Premier Gordon Campbell about a “new relationship” with First Nations, they say nothing has changed.

In the 1850’s, the Douglas Treaties secured aboriginal rights for First Nations on Vancouver Island. The treaty declared First Nations could continue hunting, fishing, and gathering plants on their traditional territory, and that village sites would be respected.

But the Crown breached the treaty when it made land grants to private individuals, the natives say. Until now, some of the private lands claimed by Western Forest Products, a giant logging company, were managed under a provincial Tree Farm Licence. Western Forest Products has applied to take the land back in order to log it and sell it off to developers. The province has quietly agreed to transfer 28,000 hectares (70,000 acres.)

Western Forest Products plans to sell an undisclosed amount of the property for housing and recreation use to help pay off its roughly $200-million debt.

“The prime driver and the prime reason why we’ve been looking at doing this is the company has a high debt level and we still have a very high interest rate on that debt,” company president and CEO Reynold Hert told the Victoria Times-Colonist on January 31.

Western Forest Products stands to make millions on the “log it and flog it” deal. But the natives get no economic benefit from the resource extraction on their land. And according to Rupert Wilson, a Kwakiutl Band Councillor, the Kwakiutl have nowhere to go.

“The whole treaty area – a lot of it has been given away by government. We are surrounded on all sides in Port Rupert,” Wilson said. “There’s no land left. There’s no economic development and people are having a hard time.”

“It’s time we really look at land claims, and not stop until we get some justice.“

Removing the land from the Tree Farm Licence means the company has less stringent environmental and logging regulations to deal with, according to Ken Wu, campaign director for Western Canada Wilderness Committee. The transfer will allow it to cut more trees and ship raw logs out of the province in three years, he noted in a release February 1.

But the law may be on the side of the Kwakiutl, at least as far as holding the government to high standards of consultation and accommodation, So far, the Supreme Court has not returned any land to the natives, but several rulings have sided with First Nations when they could demonstrate that the government failed to meaningfully consult with them.

The Kwakiutl Band Council says that the government sent letters about the application, but it did not consult the band, which is still waiting for official notice of the January 31 decision. The Kwakiutl learned the land transfer was approved through news broadcasts.

“They said they consulted with us,” Ambers said. “That, I have to say, is an absolute lie.”

A strongly worded letter to Forest and Range Minister Rich Coleman on February 5 blasted him for allowing the forest company to “blatantly disregard their obligations by your ‘watchdogs’ to notify First Nation communities of their harvesting plans.”

“We can only surmise that the Kwakiutl First Nation’s rights and title have effectively been removed from the tracts of land that are now Western Forest Products’ private lands,” the Band Council wrote. When Coleman did not acknowledge the letter, the band released it to the press.

Coleman defended the Ministry’s decision on CBC Radio February 12. “I sought the legal advice that was necessary,” Coleman told CBC. “I looked at the files from the right perspective. I felt the proper consultation had taken place. There are remedies for the band.”

But the only remedy for the band now is a lawsuit – one the Kwakiutl can hardly afford. Nevertheless, the North Island Gazette reported February 7 that two options were proposed at a community meeting: filing for an injunction, and holding “nation actions” like road blockades.

The Kwakiutl have resorted to peaceful civil disobedience in the past, when they occupied Deer Island to assert their territorial claim.

“What this government does is make deals before consulting with First Nations, to hamstring your community from getting what it deserves,” NDP forest critic Bob Simpson told the crowd assembled at the Legislature building.

“How many court cases will it take before [the BC Liberals] realize they have to have meaningful consultation and hear your voices before a project goes ahead?” he asked.

“The meaning of consultation and accommodation has to be more than letters and telephone calls,” said Albert Robinson, the Kwakiutl’s senior administrator. “It seems to me the BC government is able to define ‘oppression’ but it’s having a difficult time defining ‘consultation’ and ‘accommodation.’”

While the legal battle looms, the Kwakiutl are struggling to take stock of the land they are about to lose. The area in question includes old-growth coastal rainforest and a network of lakes, wetlands, and rivers on the northeast coast of Vancouver Island. The cedar, Douglas fir and hemlock forest supports populations of bears, deer, salmon, and marbled murrelets, along with berries and edible plants. The community drinking watersheds for the town of Port McNeill and the Kwakiutl’s Cluxewe Reserve may also be affected by the logging.

Across much of Vancouver Island, over-logging and development have decimated wildlife and plant populations, disrupted soil hydrology and inflicted erosion and stream damage.

“As it stands now, if we do nothing, Western Forest Products can do anything they want with that land,” Robinson said.

2 Responses to Kwakiutl: “We are going to start fighting”