Going Feral in the Backcountry

Sun-baked, wind-swept, we’re struggling to the summit, panting and squinting, and suddenly the plateau stretches below us, a line of emerald and sapphire lakes and pools linked by tufts of gnarled firs, shimmering in the merciless heat. Kicking off sweat-soaked shorts and boots, we run down the bank and dive naked into Mist Lake.

Whooping with shock and pleasure, backstroking and dog-paddling in circles, laughing and hollering. Clambering out again, streaming cold water, hot shale crumbling under bare feet, we turn to view the peaks, the icefields, behold the silver spines of mountain ranges marching north and south from the pass and the forbidding glaciers glowering from the east and west. The breathless hush, the blinding sun, the azure sky and the peaks surrounding us echo a silence that rings and rings. Looking down, the valley where we climbed is hidden between the toes of the mountains. The canyon where we camped is a dark thread in the shaggy carpet of old-growth forest. From here, we can see the last clearcuts in the valley. The last, because this is where we stopped them.

Seven days in the backcountry, seven days clearing the tangled trail on this overgrown hiking route. We tramp for miles through the steep, broken terrain of the canyon lands cutting brush, building bridges, bypassing giant cedars fallen across the trail, and sleeping under the stars.

In the darkening violet of dusk I renew the pledge I made years ago in this place. And the spirits in the forest answer: remember, and never give up.

Interview with the Earth Liberation Front 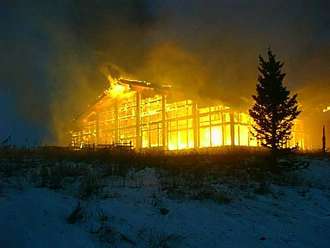 Back in 2003, the Earth Liberation Front Press Office (ELFPO) announced that an anonymous press officer had stepped up to replace Craig Rosebraugh of Portland, OR. The announcement said the ELFPO would provide interviews with media by email. I contacted the press office to ask about the group’s philosophy and practice of direct action and sabotage.

Why do people commit eco-sabotage? Especially “extreme” examples like the arson at Vail and torching SUVs?

Earth Liberation Front Press Office: We believe that people are driven towards direct action as a response to the feeling that more traditional forms of activism can’t work without a component of economic sabotage.

Direct action serves a double purpose of both costing target businesses and agencies economically as well as being dramatic enough to garner public attention to an issue – it is these twin results that continue to make illegal actions popular with a segment of those resisting the dominating aspects of industrial society.

Is this kind of direct action effective? What does it accomplish?

Effectiveness is something that is not easily measured. There have certainly been some examples of direct effectiveness in terms of costing businesses for the price of their actions (such as the rise in insurance costs for SUV dealers in the United States as a result of a wave of vandalism acts and fires) – however effectiveness primarily has to be gauged over the long-term.

The recent anti-sprawl fires in the US are an example of how actions can be both economically effective (in terms of costing developers extra money in security costs), but also effective because the whole discussion around urban sprawl was opened up in mainstream news as a direct result of these fires. An issue that the Sierra Club has been hammering at getting into the public consciousness for a decade, and all it takes is a few well-timed development fires and within a week there are editorials on urban sprawl popping up in every major newspaper across the United States.

That is effective in terms of achieving the goals stated by the ELF – no question about it – but is it effective in bringing about massive changes to industrial society as whole? Not yet.

Is the ELF revolutionary?

Revolutionary in the sense that the ELF’s goals seem to be to bring about large-scale social and ecological change – yes. There is no question that the ELF is motivated not only by environmental issues, but in their messages over the past decade there have definitely been statements that hint at a broader anti-capitalist analysis and a desire to bring an end to our current societal organization.

It seems every time an action happens, the mainstream enviros are eager to condemn the ELF as “terrorists.” Why the backlash?

The backlash is because mainstream enviros are afraid of being lumped in with “terrorists” and they seem to believe that most of the public is so stupid as to equate the Sierra Club with the ELF. We believe the public interested in environmental issues (or the public at large) can discern between mainstream and illegal action groups.

What’s funny is that the extreme actions of the ELF actually capture media and public interest in a way that mainstream enviros don’t – which in the end gives a lot of space and media time to the above-ground enviro groups to discuss their perspective on a given issues (such as sprawl or SUV use).

We believe that the mainstream enviros wouldn’t get nearly the airtime they do without the extreme animal and enviro groups carrying out illegal actions. However, while this may be true, we don’t believe the mainstream enviros will ever officially be on side since they are reliant on large amounts of funding from not only the general public but often also corporations trying to “green” their image. In no way can those groups ally with radicals who break the law, their funders would not like it.

I know some get a secret thrill from hearing about particularly dramatic actions. Why is that? Do you think more people support the ELF than we’re led to believe?

We get lots of “love letters” for the ELF every week which tells us that there’s greater public support out then the media would have us believe. We think that ELF actions are popular with people because they are expressions of resistance in a society that is frustrated, controlled, and ultimately stunted. To see a group act outside of the social training is secretly thrilling to everyone who wishes they too could break free just a little bit and go after the industrial mechanisms that keep us enslaved.

There is also a strong psychological component to the use of fire as a tactic – the ultimate anti-social act is to burn down that which society prizes(buildings, vehicles etc) – to reduce that to ashes is the ultimate “Fuck You” and on some level we respond to that very strongly.

The ELF is now on the FBI’s domestic terrorism list. Has this caused problems for people who talk openly about the ELF in the US?

Activists vocally supporting the ELF in the US have definitely had a lot of problems over the past few years with the FBI going around and generally harassing them with raids, interrogations and the threats of Grand Juries.

The last above ground press officer for the ELF was raided 3 times in two years, and even the Canadian ALF Press Officer was raided a year and half ago by the RCMP on behalf of the US Government. The FBI is generally frustrated by their low rates of successful prosecution in ELF and other direct action sabotage cases which means that they will go after anyone above ground who is vocal and supportive.

In Portland, OR, Jeff “Free” Luers was sentenced to 22 years for burning SUVs, more than if he’d committed rape or manslaughter. How has the threat of harsh punishment affected the amount of ELF sabotage?

We don’t think it has. Jeff was sentenced 3 years ago, and since that time we have seen an increase in the number of actions and the amount of damage caused. The largest eco-sabotage action in US history was carried out in August in San Diego costing $50 million in damages and 2003 as a whole was an incredibly costly year in terms of ELF damages – so there is no evidence that harsher punishments are deterring eco-sabotage.

But most who commit these major crimes get away with it. Why is that?

Meticulous planning and attention to detail. Not getting caught is a matter of planning an action over a long-period of time so as not to run into any surprises during the action, and leaving no dna or other forensic evidence behind that could track the police back to the person who committed the action. An important adjunct to this of course is the rule of secrecy at all costs. The few people who have been arrested over the past few years generally tend to be young (under 21) and to a number, every one of them had made the mistake of talking to someone they shouldn’t have (a girlfriend, school friends etc). who either turned them in or caved under FBI interrogation.

The people carrying out the larger-scale actions are likely more experienced in planning and carrying out covert activities which means they leave few if no clues behind (at least according to FBI reports) which would tie them as individuals to the action at any point.

Sometimes people ask how they can “join” the ELF. What advice would you give to folks who want to be more active?

No one can join an existing ELF cell, since they operate anonymously and aren’t contactable – but those who want to join the ELF need only to carry out actions following the ELF guidelines, and claim those as ELF actions in a public way (through graffiti at the site or a communique to the Press Office, or some other means).

We would recommend that those wanting to carry out any illegal direct action be aware of the length of time and complexity of detail that planning will take, that practicing with incendiary devices in a remote area is recommended before trying to use one in any action, and that it is a good idea to start small and over time (through experience) build up to larger scale actions.

In addition to that we suggest only working with people who you know very well, and being solid in all security measures (such as not talking outside of the group). Resist.ca has good information on security for activists that should be read and taken to heart by anyone proposing to break the law.

Where can we get more information about the ELF?

These are the sources we contribute to regularly as the press office.

Tagged as Eco-defense, Most Popular, Politics